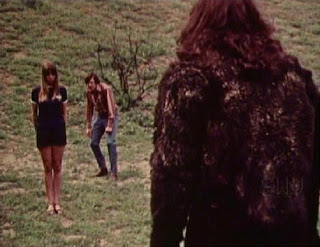 After my review of Sweet Prudence and the Erotic Adventures of Bigfoot, there was a comment by Ira Brooker asking what I thought of this film. Most who have seen it have only seen the few minutes tacked onto the DVD of Godmonster of Indian Flats, but there's a 50 minute version available that's missing only a few minutes of hardcore sex or maybe one scene. The film starts out as a 16mm documentary following three couples who go in search of Bigfoot, also known as The Geek (though, only in this film, I think). It's endless footage of people walking for 10 minutes. Then the couples split apart and start doing couple stuff, like admitting to almost having sex with one's sister and then having poorly filmed uninteresting hardcore sex. Then, all of a sudden, Bigfoot shows up and he's wearing a terrible outfit that makes one long for the gorilla suit in the softcore The Beast that Killed Women.


Wow, that's a lot of links for one of my posts.


Bigfoot rapes the women. Graphically. The guys go from being ineffectual in stopping him to being kind of voyeuristic. Then it ends.