How bad is it? Slightly better than the first Captain America TV pilot film.
Should you see it? If you like Christopher Lee's worst films, or Connie Sellecca. 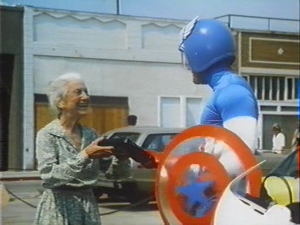 The first Captain America TV film, also from 1979, was a pilot for a proposed series that would be a sort of "Wonder Woman" for boys. It sucked. Nonetheless, there was a second attempt to start the franchise with this film, which is better paced and not burdened with trying to explain the origins of characters. It still sucks, but not as badly. Christopher Lee plays the bad guy, who has an aging serum he plans to unleash on major cities. Connie Sellecca does her usual "look pretty" role. There's one good motorcycle chase scene, but some very poor fights, a lot of painting (our hero paints his cat's portrait more than once), a terrible thrown shield special effect and the hero's portrayed as a guy in a van who helps little old ladies.
Posted by SteveQ at 9:10 AM