How bad is it? It's one of the worst "Jaws" rip-offs I've seen.
Should you see it? If you like animal attack films and keep a finger on fast-forward, maybe. 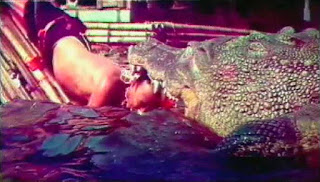 In Thailand, a man's family gets eaten by a giant crocodile, so he goes to a university professor that explains that it's a mutant caused by nuclear tests in the area. The local authorities aren't effective, so the guy hires a fisherman to help him try to capture it. So, yes, it's the plot of "Jaws," except for the "Godzilla"-ish bit. The size of the animal varies enormously, sometimes being big enough to swallow an entire village. The puppet attacks are very poorly done, though the scene of a legless man swimming is interesting. It appears to rely heavily on borrowed footage and it often has scenes where nothing happens on camera, which is probably due to cropping the image without consideration of what got cropped. It gets monotonous quickly.
Posted by SteveQ at 9:16 AM