How bad is it? It's a Sci-Fi (SyFy) original, a throw-back to 1950's giant bug films. Not good.
Should you see it? You've seen it all before. Wanna see it again? 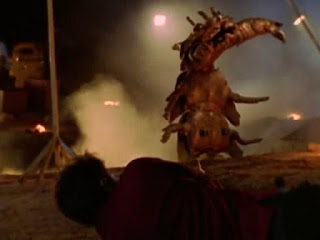 A bachelor party goes to India to go into deep caves (don't think about it too much), they get trapped and have to fight off giant centipedes that, when cut in half, become two giant centipedes. If you know anything about spelunking, nothing is realistically done and there's way too much light. The one thing this film has going for it is that there's no CGI effects, but there's also no characterization, no pacing, some embarrassing dancing and a poor ending.
Posted by SteveQ at 9:22 AM