How bad is it? It's nearly plotless, cheap and amateurish.
Should you see it? Yes. 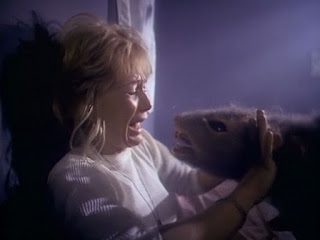 From producer Charles Band and director David DeCoteau, this is not quite "Sorority Babes in the Slimeball Bowl-O-Rama," but then again, what is? Linnea Quigley has a shower scene and porn star Ashlyn Gere doesn't remove her clothes (though she, too has a shower scene!) The story has military deserters, post-nuclear holocaust, escape acid rain in a bunker that's an abandoned research lab. There they encounter giant rats that don't move unless they're thrown and a rubber suit monster that has motivation issues. Even at a very short run time, the film is padded with crawling through vents in goop. There's a lot of rip-offs of other films, including an "Alien" belly-rip and an "It's Alive!" demon baby that makes for a very long finale. The sets are particularly cheap, possibly a storage unit somewhere. It's not good, but it's enjoyable trash, about the end of the Band/DeCoteau heyday.
Posted by SteveQ at 9:23 AM