How bad is it? It's a minor typical 1980's action flick, a little late to the party.
Should you see it? I don't think so. 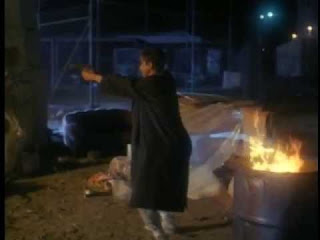 Reports of how terrible this film is are overstating things; they've never seen an Al Adamson film, for example. This was directed by Wings Hauser, who gave himself top billing, though he sits behind a desk for most of the film, only to become the hero in the last reel, in an unintentionally amusing way. The story is about two rookie cops tracking down a new designer drug; there's nothing new there. Most of the shots are static and with odd blocking and the actors are not great, particularly the campy villain. There's a tacked-on sex scene, a pregnant woman dragged by a car and miraculously unhurt and a locker room tap dancing scene.
Posted by SteveQ at 9:29 AM