aka Zeus - The Crime Killer

How bad is it? It looks like it was hastily slapped together.
Should you see it? No, which is okay, because it's only on 30 year-old VHS. 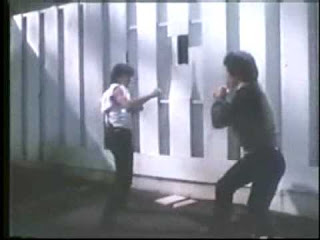 Our hero is called Zeus and he's a cop that gets fired for killing the corrupt cops that tried to kill him. The president's war on crime gets his ex-wife and daughter killed, so Zeus gets recruited (by the CIA maybe?) to fight crime. He and two other ex-Vietnam POW's then train and go after the bad guys in a warehouse, where they have arms they plan on selling to... Arabs, maybe? All the characters speak in a very stilted fashion, which might be due to the writer and director speaking English as a second language (shades of "The Room"). There's topless tennis, a Mexican gardener disguise and a botched motorcycle stunt where a wig gets lost. There's also a truly preposterous wretched ending involving a bomb that just happens to be there.
Posted by SteveQ at 11:09 AM