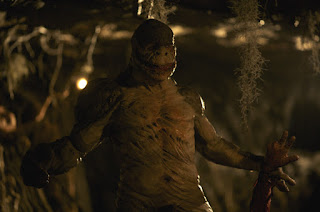 This should-have-been-straight-to-video effort is either an homage to or a spoof of 1950's monster films, more "The Alligator People" than "Creature from the Black Lagoon." That one can't tell just how many of the chuckles are unintentional is kind of charming. After an alligator kills a man's family, he kills it, eats it - and becomes half alligator himself. Later, six young people decide to investigate the story, but not until we see most of them naked. Sid Haig's in it. There's a mud fight, incest, a lesbian make-out scene, bad accents, a couple of bad plot twists and a monster that's not really frightening. It has some dull stretches and adds nothing new to the genre, but it isn't terrible.
Posted by SteveQ at 9:22 AM