How bad is it? It's among the worst films I've seen recently.
Should you see it? Absolutely not. 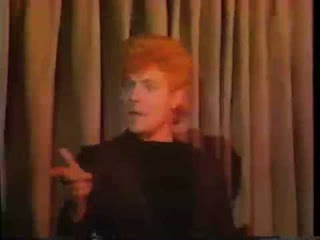 This film was seen by almost no one the week or two it was in theaters, then by no one when it was on VHS and now, on a bootleg DVD, it's getting some traction in the bad film circles. It's about - supposedly - a dystopian future where people are kept controlled by the cheap entertainment of the comic (who is NOT funny). There's a love interest and a fast-forwarded romance including a birth with obvious doll, there's delusions and nightmares, there's scenes repeatedly inter-cut in what must have been an attempt at meaning and there's bad 1980's hair and music. This is terrible, but there's nothing endearing about it, which is what I hoped for.
Posted by SteveQ at 8:48 AM