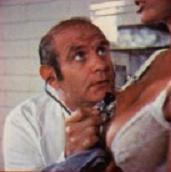 This film is the most huge breast-obsessed film outside of Russ Meyer's world, yet there's very little nudity. Shari Eubanks (of "Supervixens") stars as a navy enlistee who fights to recover her sister, who's been kidnapped by thugs working for a senator who Chesty's sister had photographed in drag. No one believes her, she's thought to be AWOL and then her recruit friends come to the rescue. Besides Eubanks, there's Dyanne Thorne ("Ilsa - She Wolf of the S.S.") as a nurse who gets a chest exam OVER HER BLOUSE, Rosanne Katon ("Swinging Cheerleaders" and Playboy centerfold) and even Uschi Digard (from pretty much every exploitation film). If that's not enough, there's also Scatman Crothers, Fred Willard, Betty Thomas and Timothy Carey (in wild clothes, clucking like a chicken). There's catfights and bar brawls and chase sequences, but it all ends disappointingly. And though there IS some nudity, you almost have to freeze-frame to be sure.