How bad is it? It's an unfunny comedy, but not unwatchably bad.
Should you see it? You'd have to be desperate. 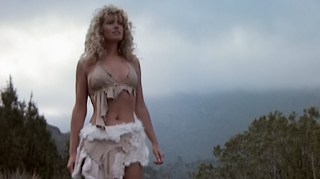 A harassed nerd, after the obligatory scene of being in a girls' locker room, goes on a field trip to a cave, where a magic crystal (and apparently jet planes, but it's never really explained) opens a portal in time. He goes to when people lived in caves, but have 1980's hairstyles and freshly laundered animal skins. He falls for a pretty blond with perfect teeth (if she could act, she'd have been a star) and spends his time trying to teach her English, particularly "sit on my face." She's innocent and he's creepy, but they do end up having sex. There's a mountain lion (not a sabretooth), some cannibals, booger jokes, jokes involving shaving cream, deodorant, a flashlight and a trampoline. [What's a trampoline doing in the past, or on a field trip to a cave, you ask?] Among the cast is Michelle Bauer and Stacey Q (Stacey Swain), which is why I watched it and probably why it's available.
Posted by SteveQ at 10:08 AM