How bad is it? It's a horror comedy that has neither horror nor comedy.
Should you see it? No, though the cast is interesting. 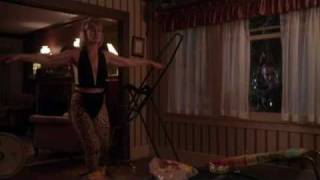 Most of the abuse heaped on this film is due to the fact that it is a sequel to "Return of the Living Dead" and not to "C.H.U.D." The last remaining person "chudified" is, of course, accidentally set free. On Halloween. Yes, it's that original. The cast has Robert Vaughn, Bianca Jagger, Larry Linville, Jack Riley, Norman Fell, June Lockhart, Rich Hall and (in an unbilled cameo) Robert Englund; so there was some talent involved. There are zero scares and the silly characters doing slapstick and TV sitcom-ish scenes aren't funny.
Posted by SteveQ at 9:45 AM