How bad is it? It fails both as horror and as satire.
Should you see it? No. 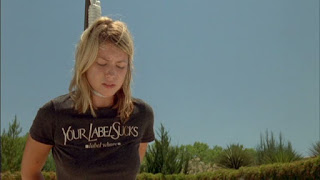 This inexplicably has its fans and also a few people who think it's so bad that it's entertaining; it's just bad. A guy (Edward Furlong, looking rather chunky) loses the girl (Jaime Pressly) in a reality TV show and then creates his own show, where contestants that get voted off are murdered. His motivation is unclear. There are a lot of plot twists in the first 20 minutes, then a slow grind to an unsatisfying ending. There's a lot of suggestion that there will be nudity, but none is shown. There's a bunch of familiar faces from recent horror films - the cast is much better than usual for what turns out to be a slasher film - but none of them has much to do. As the years go by, this supposed satire of reality TV gets less relevant and it's hard to imagine what people will think of this in 20 years (if any copy still exists then). There's one killing that's particularly poorly done and borders on entertainingly bad.
Posted by SteveQ at 9:53 AM