How bad is it? It's interminably dull.
Should you see it? No. 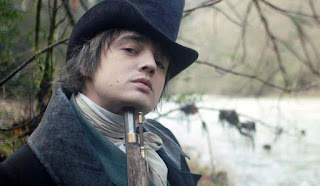 "Ooh, it stars Pete Doherty from the Libertines! And it's directed by a woman! And it's based on a French novel. It just HAS to be interesting!" or so I imagine anyone saying who's considered watching this film not knowing it's being skewered by critics. The story's semi-autobiographical, about de Musset's romance with George Sand during the political strife of the 1830's. Want to see malaise and ennui filmed? There's a duel, betrayal, despair, debauchery, death and a small role for odd-looking model Lily Cole; unfortunately, there's about 90 minutes of mumbling narration and not enough plot to hang the film on. This would've been hard to make without first-time actors and an inexperienced director. As it is, it's a chore to sit through.