How bad is it? It's not even the best killer bear film with that name in theaters in 1977.
Should you see it? If you absolutely love nature-revenge films, it's watchable... barely. (bearly?) 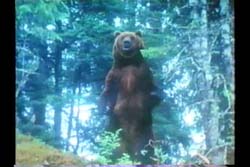 Fast on the heels of "Grizzly," which was also called "Claws," came this very similar film; no one died in a helicopter during filming, so that's a plus, but otherwise it's strictly derivative. A grizzly in Alaska is wounded by poachers and then takes revenge on humans. A couple who lost their son to the bear, a woodsman, two university students with a capture cage and shoddy-looking equipment, a game warden and a stereotyped native then hunt the bear. There's a lot of scenery shot padding, a horrible and boring romantic subplot, lots and lots of flashbacks, an obvious taxidermy bear and a ridiculous pay-off (flare gun and cliff). There are two actors in it named Buck, and neither is Buck Flowers, who would've been an asset.
Posted by SteveQ at 9:18 AM