How bad is it? It's a direct-to-video fifth installment of a bad franchise.
Should you see it? Only if you're a fan of someone in the cast. 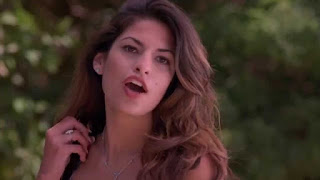 This was released straight to video and is on a DVD with the 6th installment, which I may review tomorrow. [update: nope, not worth it] It'll only be remembered for being Eva Mendes' debut and she does not rise above the material. Neither does David Carradine, whose head splits open. There's also Fred Wiliamson as the sheriff and Season Hubley, Kane Hodder and Ahmet and Diva Zappa. After a bungee jumping death, a bunch of annoying kids are stuck in a town where spooky kids sacrifice to a corn god (essentially, they have a bonfire in the silo and there's a green mist). Very little happens, but it looks like it was played for laughs and it passes by soon enough.
Posted by SteveQ at 11:07 AM