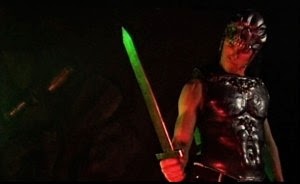 Full Moon Entertainment has way too many films on this blog. This is the first time they tried a slasher film and it's pretty good for them, pretty good for any shot-on-video slasher, but terrible for anyone not looking solely for campy gore. Best scene: there's a beheading with blood spewing like a geyser, which borders on funny. The plot has students in the Alps (obviously California) and one discovers a cave with Roman artifacts; he takes the helmet off a corpse and dons it - who wouldn't? - and gets possessed by a gladiator's spirit that has him hunting down his friends for the rest of the film.