aka A Ted Named Gooby

How bad is it? It's an unintentionally creepy children's film where little happens.
Should you see it? Only if you want to think that "Ted" was pure genius. 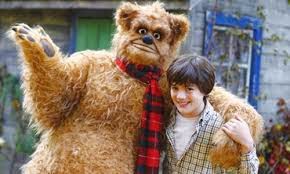 A kid with a great imagination and a lot of fears imagines his teddy bear come to life as a six foot tall, rather scary looking, creature with the disconcerting voice of Robbie Coltrane (Hagrid, of Harry Potter). The kid's father (David James Elliott) thinks there are space aliens in their house. At one point, the kid has a head injury that sends him to the hospital, but it then goes on to show a minute of bad slapstick pratfalls by Gooby before saying that the kid is just fine. That's how this movie goes: set something up and walk away. Eugene Levy plays a character named Nerdlinger (no, I'm not making this up).