How bad is it? It's an unromantic romance with inactive action and unfunny comedy.
Should you see it? No. 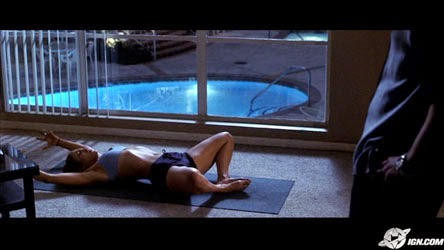 Roger Ebert was one of very few critics that did not pan this film, because of the chemistry between the leads Jennifer Lopez and Ben Affleck (soon to be merged into "Bennifer"); no one else saw that chemistry. Gigli (pronounced Zheelee, not Giggly, which is what it makes the viewer) is a mob enforcer sent to kidnap the mentally handicapped brother of an attorney to influence a court case. Then a lesbian criminal enters the scene and everyone finds they like each other. Christopher Walken shows up at the very start, Al Pacino makes an appearance (as does Lainie Kazan), but no one can save this film. Nothing happens, slowly.