How bad is it? It might be the worst adaptation of an E.A. Poe story.
Should you see it? No. 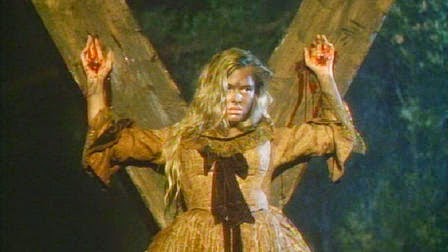 Produced by Roger Corman, directed by Jim Wynorski and starring Nicole Eggert in a dual role. Need to hear more? The daughter of a witch put to death inherits money and perhaps gets taken over by her mother's spirit. David McCallum goes slumming here, with little plot, poor acting, lack of direction and pointless fake scares. It's mercilessly padded and relies heavily on abundant female nudity (it IS a Wynorski film, after all) which only caused me to wonder why there were bikinis hundreds of years ago.