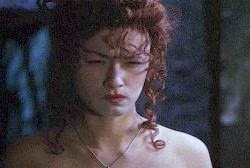 College students fix up an old house in exchange for free lodging, only to find that dolls are getting put in sexual positions, a ghost starts making advances, a severed limb feels someone up in a shower and other oddly sexual supernatural things occur. The house, of course, has a portal to hell. After escaping the evil, the morons keep going back, eventually with Roy Scheider, a professor whose an expert in the field (and a descendant of the house's original inhabitants and a psychic and whatever else the plot needs). Occasionally, the film tries to be funny and fails. The film has a distinctly North Ireland feel - the cars drive on the wrong side [flip the film, silly!] - though it's supposed to be the U.S. Produced by Roger Corman, whose name is synonymous with 'dreck,' the film does have some decent camerawork and atmosphere and the ending isn't bad, and the naked girls are attractive, but there's not enough to recommend.