How bad is it? It starts bad, gets desperate and runs out of jokes quickly.
Should you see it? Check out the cast below and you won't be able to resist. I'm sorry. You still shouldn't see it. 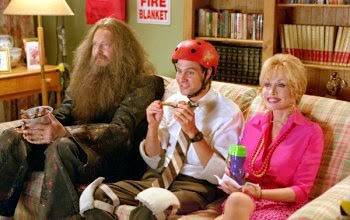 Dave Sheridan does Jim Carrey in Ace Ventura, and not well. His daredevil father has an accident and his mother becomes overly protective (he always wears a helmet) and he grows up to be an insurance claims investigator (i.e. "C.I."). His investigations require a variety of outlandish costumes and exactly five jokes in an hour and a half. The reason anyone would watch this is because of the cast.