How bad is it? It might be the worst film Paris Hilton was in, which makes it extremely bad.
Should you see it? No. I can't imagine why anyone would. 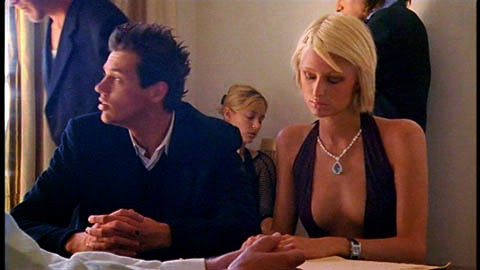 "Pledge This" and "Bottoms Up!" are terrible Paris Hilton films, but not enough for me to write about. "Repo: The Genetic Opera" is surprisingly good (in comparison). That leaves this and "The Hottie and the Nottie" (to be reviewed here in a few days) as the Paris bad films to review. This bounces in and out of the IMDB bottom 100 films, but belongs there simply for being soulless. Most terrible films at least strive to achieve something. This film has an athlete on his summer vacation going home to where thugs have taken over. Everyone acts terribly to each other - and acts terribly, period. The protagonists aren't anti-heroes but just unlikeable. One bad guy is half-way believable, but you don't care about him or his victims. What's worse is that the film's emotional level is that this is supposed to be light-hearted and enjoyable. Paris Hilton does very little in this film, compared to her other "star" vehicles, but that does not improve the film.
Posted by SteveQ at 11:45 AM