How bad is it? It's a musical comedy horror that fails at all three genres.
Should you see it? It may be hard to find, but it's worth a look. 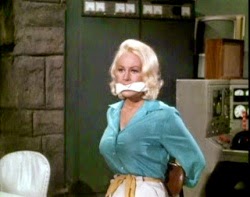 This is a sequel to "Las Vegas Hillbillys" (and the misspelling bothers me) with the busty blonde role that was Mamie Van Doren's AND Jayne Mansfield's being portrayed by Joi Lansing (who happened to be the wife of Lester Flatt of the bluegrass duo Flatt and Scruggs, which explains a lot of what's to come). Two country music hopefuls travel to Tennessee with their manager and end up at a haunted house that happens to be the cover for a spy ring. Then there's a gorilla in the basement. Then there's a real ghost. There's Basil Rathbone, John Carradine,and Lon Chaney Jr. in late-life roles; Rathbone would die soon after, Carradine made another 100 films. Ferlin Husky sings. Merle Haggard sings. Joi Lansing sings. There's a song every few minutes, plus an entire concert of at least five songs after the movie ends. Not one of the songs is actually good. The humor doesn't work and the laughing at them, rather than with them, fades very quickly as well. Still, with this mishmash of elements, it's still irresistible.
Posted by SteveQ at 9:58 AM